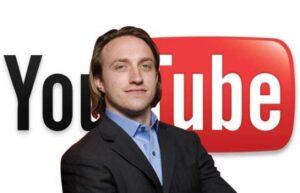 Chad Hurley is an American media mogul, co-founder, and former CEO of the video-sharing website YouTube and MixBit. In June 2006, he was voted 28th on Business 2.0’s “50 People Who Matter Now” list. In October 2006, he and Steve Chen sold YouTube for $1.65 billion to Google.

Hurley worked in eBay’s PayPal division one of his tasks involved designing the original PayPal logo before starting YouTube with fellow PayPal colleagues Steve Chen and Jawed Karim. He was primarily responsible for the tagging and video sharing aspects of YouTube.

In 2018,Chad Hurley together with Ken Martin and Nick Swinmurn founded GreenPark Sports.GreenPark Sports is  a social gaming developer designed to create a virtual sports and e sports fans.It’s headquaters is in Burlingame,California and among it’s partners are The NBA,Laliga and League of Legends Championship Series.

Chad Hurley was born in Reading, Pennsylvania, the United States to Don Hurley (father) and Joann Hurley (mother). He has two siblings a brother and a sister Brent Hurley (brother). Although, he is the second child in his family.

Chad graduated from Twin Valley High School, Elverson in 1995. Later, he went on and received his B.A. degree in Fine Art from the Indiana University of Pennsylvania in 1999. He was a standout runner for Twin Valley High School’s cross-country program, which won two of its PIAA State titles with him as a member in 1992 and 1994. Furthermore, Chad was also a member of the Technology Student Association during high school. Since childhood, Hurley showed interest in the arts and became interested in computers and electronic media during high school.

In 2000,Chad Hurley married Kathy Hurley but divorced later in 2014.Chad remarried in 2020.He married Elise Walden and together they moved into a new house located on an estate valued at approximately $10 million.

Chad Hurley has only two chidren from his marriage with Katthy Hurley.He Has not disclosed to the public any information about his children’s names.

In 2013,Kanye West proposed to Kim Kardashian and among the invited guests were Chad Hurley.Chad took a video of the event and posted it on YouTube.A scandal ensued afterward when Kanye West and Kim Kardashian sued Chad for posting the content without their consent.

The court ruled in favor of Kim and Kanye West  and Chad had to pay a settlement of over $400,000.

YouTube’s other two co-founders, Steve Chen and Jawed Karim received 625,366 shares and 137,443 shares, respectively valued at $326.2M and $64.6M. The Journal’s report was based on Google’s registration statement with SEC filed on February 7, 2007. However, he stepped down as CEO of YouTube in October 2010 and stated he would stay on as an advisor of YouTube. Thus allowing Salar Kamangar to take over the CEO position.

In August 2013, Chad launched another company called MixBit which does video editing using smartphones. According to Steve Chen, it was Chad’s idea to turn Avos into MixBit even before the inception of YouTube.

The App resembles other famous short-video recording smartphone apps such as; Vine, Instagram, and Vyclone. Its limit of recording stretches up to 256 clips, each clip can be a maximum of 16 seconds long. It also features editing tools similar to its other competitor apps. Mixbit now Zeen was acquired by BlueJeans in August 2018.

Chad was involved as a major investor with the US F1 Team, one of the new entrants in Formula One automobile racing for the 2010 season. On March 2, 2010, the team’s personnel were dismissed from their duties and the team was unofficially shut down. Neither Hurley, team principal Ken Anderson nor sporting director Peter Windsor would comment on the team’s failure to make it to the grid.

Chad Hurley has made several investments. He is a part-owner of the NBA’s Golden State Warriors and the MLS’ Los Angeles Football Club.